Take a look at the router GUI Below, notice anything different? AN AD ON THE LEFT SIDE!!!! I wasn’t a huge fan of netgear before but this will definitely prevent me from buying any future products. Shame…

This is the initial book screen to your router after firmware reset, you have to scroll down to the bottom and then below will be a link to enter normal router functions. So they basically try to confuse you into using their app…

Note: I ended up sending these two R6120 routers for electronics recycling, I could not consciously sell these to anybody knowing how horrible they are. I will not buy netgear products anymore

About half a year ago I purchased a Samsung curved monitor (https://amzn.to/2YopwUj) thinking I’d see what it’s like to use a curved monitor. After setting it up and using it for 5 minutes I regretted getting it, everything looked curved, lines were curved, the taskbar was curved. How am I supposed to tell a straight line on here if everything looks curved?! Especially looking at designs and measurements.

Having already bought it, I kept using it having set it up and bought it thinking “maybe I’ll get used to it”. I kept on using it and the curves gradually faded into the background and I stopped noticing that it was curved monitor, lines looked “straight” and not curved like I used to. I’d say it took about 2 weeks to get used to it, but it’s hard to say since it was a gradual transition.

Fast forward to a few days ago 1/25/2021, I setup my new 4k monitor a Dell U2720Q (https://amzn.to/39wXlsR) and the first thing I noticed was that it felt like the monitor was bulging out, convex, as If the monitor screen had been wrapped around a ball, like a CRT monitor. It’s been a couple of days and it’s starting to feel more normal, I will update the post with an estimate of when it felt “normal” to look at a flat monitor again.

If you are switching from a flat to a curved monitor or a curved to a flat monitor realize that it will take getting used to, give it a couple weeks. I think the curved monitor does reduce the travel your eyes have to do to scan the screen but because the majority of monitors aren’t curved monitors, it means that your brain will interpret flat monitors as convex. This will only be a problem if you use the opposite monitor of what you use mostly to any large extent.

On June 2nd 2019 I purchased a 2015 Macbook Pro A1398 from ebay as a new present to myself as my first large purchase after getting a new job for a few months $835 was my winning bid and I thought it was a good price. My previous macbook was a A1502 2013 2.4Ghz dual core macbook pro 13″ with 16gb. It was a good computer still but not enough processing power for my needs so I got a new computer and my dad got a new (used) computer as well 🙂

After a few weeks of owning the laptop it found it in my backpack with the fans on high and black screen, I quickly shut it down and it started up again fine. I brushed it off as a weird bug. A couple of weeks later went by and it happened again, this is when I reinstalled the operating system and hoped it was just a faulty OS install.

It happened again a couple of weeks after that. I would have returned it but it was past the ebay 30 day return days. I decided to take it to a certified apple repair store to see if it was a simple to fix .

Diagnostics without repair are $105 which I had to pay. They diagnosed a bad logic board, something to do with the hard drive. They purposely didn’t give me specifics on errors or codes found. They suggested flat fee tier 2 repair of $650 dollars ($$@#*&) I was not happy about this.

Below is the timeline of what happened.

I really thought I had a good chance since by taking it to the apple store they had found that the laptop, originally listed as used, had a different serial number on the outside than the internal hardware, signifying that it had previously been opened and fasely listed as Used when it was really Refurbished. In addition, the diagnostics had come from a reputable certified apple repair store, I did not attempt to open the macbook myself or diagnose it.

In the end, they closed it the first time stating that

We understand the item associated with this case has been altered while in your possession. Because of this, we are unable to determine whether the item is significantly different than originally described, and we are unable to grant your claim.

This decision was made because the merchant sent the item that was ordered.

What is the point of having a 60 day warranty if even after providing proof that the item was defective by a third party certified apple store, they were still siding with the seller….

At this point after a month of fighting this case. closed both times and seeing it was going nowhere I knew paypal was not going to be of any help.

I took it back to the apple repair store and was ready to pay the $650 to have a working computer, not much else I could do. For this type of repair they have to send it to apple and they do the repairs.

A few days later I got a call from them stating that apple had escalated the type of repair and it was now considered tier 4, a cost of $1500 dollars. (@#%*)!$%) I straight up told them, I’m not paying for that, that’s basically a new computer. I picked up the laptop the next day and thought about what I would do with it.

While looking for possibly a new logic board on ebay, something I did not want to risk be defective and me mess up installation, I came across a service for diagnostics and repair for macbook pro logic board. It was listed for $145 +$10 tax. I sent a message and the seller quickly replied stating that if they can’t fix it I get my money back. Cosidering the $650 I was ready to pay for and the ridiculous $1500 estimate from apple I decided to give it a try.

The seller I first contacted and was very responsive was J&M Industries It took them about 10-14 days from the time I sent it to them to get my laptop back. I got it back Monday, Sep 30, 2019 and so far the problem hasn’t resurfaced. They told me that the sleep sensor on the logic board had corrosion, so they cleaned it and replaced it. They offer a 90 day warranty with their service which I thought was awesome 🙂

I’ve been tempted to get one of these clocks for a while. Luckily I found one at my local thrift store for $3.50!! Without instructions it wasn’t too bad to

setup, but understanding how it works was a nightmare without instructions. I thought it was a sunrise ONLY alarm clock, BUT the button under the FM radio is actually the sunset on/off button! I kept setting the sunset alarm as my wakeup alarm thinking that was setting the 0-100% brightness alarm, but what it was actually doing was going from 100%–>0% brightness as the time was reached. The sunrise alarm feature is controlled by the regular alarm (Bell icon).

END_OF_DOCUMENT_TOKEN_TO_BE_REPLACED 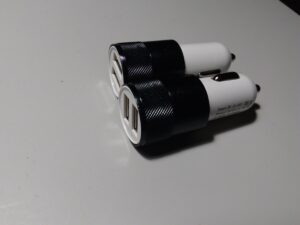 I thought I’d save some money and buy some cheap USB car adapters. I think it cost about $1 each. When they arrived I questioned whether they could actually out put 2.1A and 1A in simultaneously.  I opened one up and looked up the chip AD85063, did some searching and came across a similar post. The chip’s datasheet specifies that it can output 700MAh at 5v… This is nowhere close to the 2.1/1.1A specified… I quickly asked the seller for a refund, linking them to the datasheet, and they refunded me my money. Long story short, cheap comes at a cost.

Donating Plasma seems like a way to make easy money. The first five times you get $50 dollars, then it goes down to $25 or $35 depending on how much you weigh and how much plasma they can get out of you. Employees in the front desk are often undergraduate students who are pre-med, have in interest in medical field or want to make money. There are also like 3-4 nurses present as well as phlebotomist’s. From my conversations the younger adults working there (20’s/30’s), are there for the money, are there while they pay for school, or in the process of applying to schools. Overall the staff was very friendly and fun to talk to.

END_OF_DOCUMENT_TOKEN_TO_BE_REPLACED

These masala burger taste awesome! Combine it with some samosas and some naan and you get yourself a very nice indian style meal!